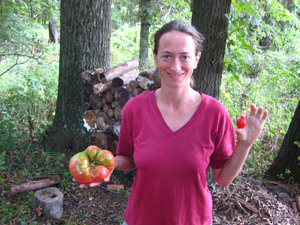 I was born in Easton, PA, on January 26, 1969 to Richard and Gaelen Ewald. My younger brother Alec and I grew up mostly in Vermont, and later I spent many formative years in Russia. Now I’m Mark’s partner, Cole’s mama, a baker, a facilitator, an organizer, a gardener, and a fundraiser.

One of the experiences that broadened my early horizons was a journey my family took when I was eight. My parents sold our house, bought an old Sunbeam bread truck, and converted it into a camper. That summer we headed west looking for a new home. My brother Alec and I were home-schooled while we were on the road, and I still remember visiting caves and parks on the way, reading the Narnia chronicles, and learning math from figuring out our (dismal) gas mileage. A sign of my parents’ influence is that on the ceiling of the truck was a map where, along with our route, my father had marked every nuclear power plant in the country so that we could give them a wide berth.

We made our way as far as Missouri, where we encountered chiggers and bluegrass music. But I was not to live in the Show-Me State yet. Instead we turned around and headed back east, landing in North Carolina. The following year we moved to Vermont, where Alec and I sledded in the woods, helped with the bees and chickens and pigs, milked the goats, and biked to town to go swimming and see our friends.

Early on I was interested in languages. Starting in 7th grade, I studied French, then Latin, then some Italian. I went to Bates College and majored in English. My junior year, which I spent in Florence and London, was a turning point for me. That was when I became a vegetarian, stopped shaving my legs, got a taste of teaching English, learned to hitchhike safely, and bought my first tent. I’d never felt such freedom and excitement.

I returned to college for my senior year hungry to learn a new language with a new alphabet. It was 1989, walls were coming down all over Eastern Europe, and Gorbachev was at the helm in Russia. It seemed like a good time to learn to speak Russian. So I took a year-long intro to Russian and then went overseas again, this time for a five-week Russian program in a provincial town called Orel. And that’s when I caught “the bug.” Russia had gotten under my skin.

A year after graduating, I returned to Orel to teach English and study Russian. Over the following nine years I lived and worked with groups in Russia, Ukraine, Hungary, and Croatia, organizing educational exchanges, helping to run grant programs for environmentalists, creating activist training programs, playing percussion while wearing a jester costume and walking on stilts, and working to form a land-based sustainable international activist community.

I became fluent in Russian and adept at pretending to speak other Slavic languages. As I began learning to facilitate meetings, I discovered I was good at helping people from different countries understand each other and cooperate toward a common goal. I became certified in teaching English as a foreign language and created a special curriculum for sustainable energy activists from nine countries. I taught ultimate frisbee everywhere I went. I learned to write grant proposals for causes I believed in. When I needed to get somewhere, I hitchhiked, sometimes beating the train to my destination.

I got arrested twice for sitting down, each time resulting in a night in jail: first in the Czech Republic, in front of the gates to the Temelin nuclear power plant; and later in Edinburgh at a Reclaim the Streets event. The night I spent in solitary confinement in a Scottish jail cell was one of the high points of my life. No kidding.

In 1998 I got my first real experience of community when I joined the Sustainable Europe Tour with fifteen other artists/activists from all over the world. SET was also my introduction to street theater, fire breathing, samba bands, action climbing, hanging from tripods, and critical mass bike rides. I loved belonging to a community, making decisions together and making music together.

I also went each year to Ecotopia, a self-organized intercultural gathering for sustainable living. There I learned more about consensus and community. I began to pursue the possibility of founding a more permanent activist community somewhere in central Europe. I was captivated by the idea of living in community with like-minded people, supporting each other’s activism, and living according to our ecological principles. It seemed like community was what my activist friends and I needed to keep us from succumbing to burnout.

Realizing that it might be a good idea to live in an existing community for a while before trying to found one, I came back to the states in 1998 and spent several months at Twin Oaks. While in the US, I also checked out Dancing Rabbit and Sandhill. I felt a real kinship with the people at DR, whose commitment and camaraderie inspired me. In fact I felt so aligned with the DR folks that I was tempted to join then and there. But I felt a real calling to take a stab at forming an Eastern European activist community.

So in 1999 I went back to Europe with my partner. To cut down on air travel, we took a Polish cargo ship, but that’s a whole ‘nother story.

For a few months we lived on the Istrian peninsula in Croatia, working to found a community there but frustrated by political and logistical barriers. Eventually we made our way back to the US (again via cargo ship). I landed a job in Amherst, MA working for a “deep ecology” based nonprofit called Sacred Earth Network, helping support environmental groups in Russia.

It only took a couple of years of paying exorbitant rent, relying on cars, and feeling disconnected from my food, before I made a beeline back to Dancing Rabbit. I came to Missouri because I felt I’d found my tribe. I realized I desperately needed to be surrounded by folks who share the same ideals and dreams as I do. That’s what keeps me sane, gives me energy, and fuels my creative impulses.

DR’s Skyhouse Community, an income-sharing group, was my home for three and a half years. Besides serving our community in many ways, I brought in a modest income by working on Russian environmental projects, writing grants and helping organize exchange programs for Sacred Earth Network and The Altai Project (a project of Earth Island Institute). Until 2008 I continued to work for The Altai Project and for the Fellowship for Intentional Community.

In 2003 I married Chad Knepp, formerly of Sandhill community and Acorn community. Although we divorced a few years later, we continue to have a strong relationship as community members and friends.

Chad’s a permaculture-based farmer, and struggled to find a way he could fit his dreams and vision into Dancing Rabbit’s “village” land use model. He wanted to be not in a village but on an outlying farm. After much discussion, contemplation, and exploration, we decided to seek ways to be near the village while creating a different kind of community. Fortune smiled upon us when another couple visited DR and later returned to join our efforts. And with Corey and Kim’s arrival, Red Earth Farms was born.

Fortune grinned again (we must have looked amusing) and sent us an angel: Aron Heintz, a friend who had been seeking initiatives like ours in which to invest. We stumbled upon the perfect piece of land, right next to DR, and learned it was for sale. Aron helped us purchase it, and on Summer Solstice 2005, Red Earth Farms acquired our lovely 76 green acres.

Love and romance have always been an important part of life for me. In 2006 I became re-acquainted with Mark Mazziotti, whom I’d met several years previously at a natural building event. We fell deeply in love, and before long he moved to Red Earth Farms, where we’re now sharing our lives.

On March 25, 2008, our daughter Cole was born here at home. She is a delightful little person who loves to learn and grow, and I’m thrilled to have the privilege of being near her as she does so.

My life here is diverse, relaxed, and full of new learning opportunities. I am where I want to be, doing what I want to do, with the people I want to do it with. I spend my time with friends at Red Earth, Dancing Rabbit, and Sandhill. I enjoy maple sugaring, playing ultimate frisbee, swimming in the ponds, hunting wild mushrooms, singing, facilitation, swing dancing, baking bread, fundraising, and learning about ways to grow, ferment and preserve food.

I want our community to be a clear and visible demonstration of a thoughtful and compassionate way to live on this Earth. I want to create a home where my family, friends, and I can learn, love, grow and flourish. Not to mention having fun! And I hope you and others will be inspired by our vision and our practice.