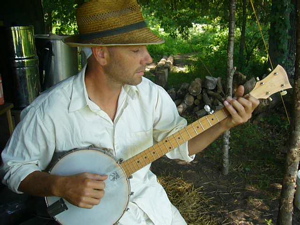 I grew up in Hightstown, New Jersey. I learned a good work ethic by playing sports, my favorite of which was wrestling. I went to college at the University of Pittsburgh where I spent much time agonizing about my purpose in life (I still do this but with less urgency). I went straight away to graduate school at Pratt Institute in Brooklyn to study graphic design. After that I sped off to San Francisco to ply my trade and enjoy the climate, which I did for about fifteen years. I landed a dream job with Public Media Center, it being about the only place in the world where one could be a well-payed graphic designer and work entirely for the public interest. As good as it was, there came a time when staring at a screen wasn’t good enough. By that time I should have been smart enough to have owned a house in the Bay Area, but I wasn’t. Thus the challenge became: how do I change my life so I get the skills to design and build my own house without being chained to a computer for eight hours a day? The answer: natural building! So off I went to the 2003 Natural Building Colloquium in Kingston, New Mexico. This eventually led to an apprenticeship with Michael Smith and Darryl Berlin at Emerald Earth Sanctuary in Boonville, California. Since then I have been building and teaching everything from earth bag to adobe in places ranging from Sedona to South Africa. Now I’m putting it all together here at Red Earth Farms. Our plan is to offer classes and workshops in natural building, Permaculture, and other homesteading skills. Check back or come by for a visit to see what we’re up to.